ReCo2gnition- The Sator Square a portal for time travel

ReCo2gnition- The Sator Square a portal for time travel 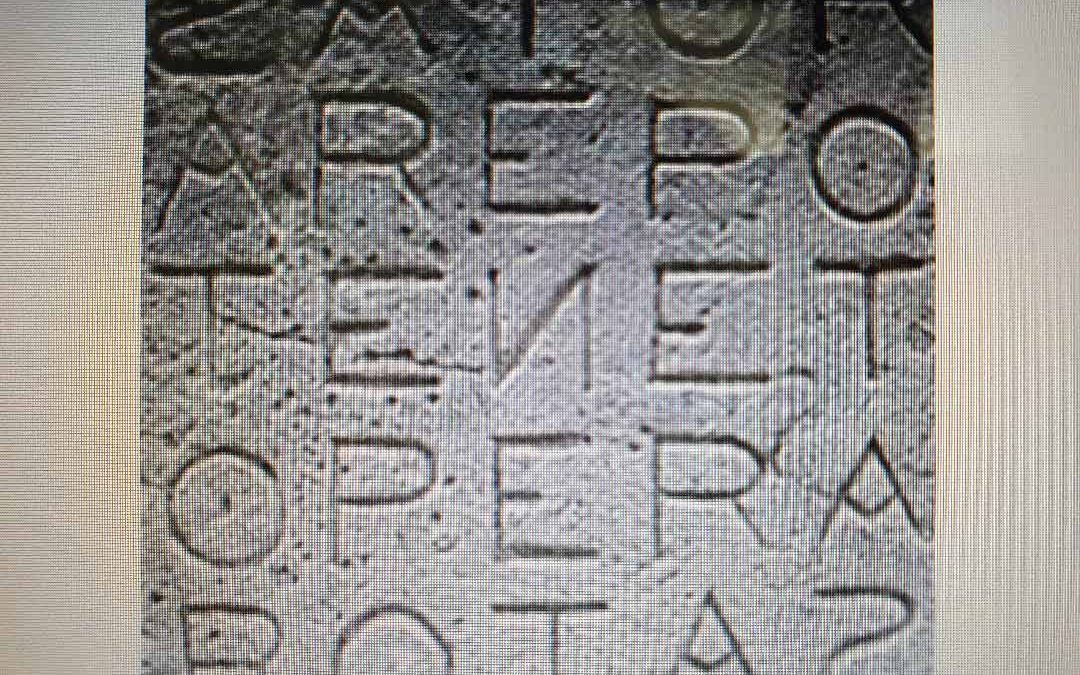 The article below seeks to explain the mystery of the SATOR square, in which I have used it’s real life mysticism to fictitiously symbolise the mysticism and illusion of time travel in my Sci Fi story.  The fantasy idea of using the SATOR square as a time travel portal expands upon the mystery of the SATOR Square’s mythology, surrounding it’s secrecy and cult following through past generations.

or charm of words

An ancient magical square, a palindrome of five words, has survived the passage of time as a riddle of mystery and magic.

An old word game, the Sator Square, is perhaps one of the most famous and mysterious magical puzzles of all time. It consists of arrangements of letters that, like a two-dimensional palindrome, can be read in the same way from right to left and back. The five words, of five letters each, have been found in ruins all over Europe and, like a riddle from the past, still, impress and perplex people today.

SATOR, AREPO, TENET, OPERA, and ROTAS are the five Latin voices whose arrangement, it’s believed, give the square its magical powers. It’s used, even today, as an amulet and talisman of protection. Interpretations of the square and all its variations, contradictions and controversies derive from the mystery of the word AREPO, the only one of the five words which are not Latin. Some scholars have classified it as a proper name. The most common reading of the Sator Square holds that: “The farmer/gardener (SATOR), AREPO has (TENET) and works (OPERA) the wheel or plow (ROTAS).” It’s a simple narrative that seems to hide a secret. And it does.

The magic square was originally thought to have been of Christian origin, created sometime between the third and fifth centuries. Reproductions have been found in Roman ruins in England, and in Italy and Spain. It was also believed to contain mystical symbols hidden among the letters, as it was frequently used by the early practitioners of Christianity. But the finding of a Sator Square in the ruins of Pompeii, in southern Italy, showed that the talisman was even older than had been previously thought, dating from 79 CE at least.

The letters contained in the square also contain an anagram. The phrase PATERNOSTER (“Our Father” in Latin) is repeated twice, overlapping at the letter N and forming a cross. The chances of this having been coincidence are minimal. As the phrase “Our Father” was commonly used in the Judaism of the time, some scholars believe that the Pompeii Sator Square was made by Jewish inhabitants of the ancient Italian city, and is probably related to a passage from the Old Testament Book of Ezekiel.

The most literal translation of the Sator Square might remind one of Japanese haiku in its pristine simplicity. Seen more closely, it’s as an enigma that’s survived the inclemency of time and comes to us today as a conjuring of riddles, whose 25 words have bewitched men for centuries (as did the magical expression “abracadabra”). It’s also a beautiful reminder of the profound power of words, creator of worlds and guardian of ancient secrets.

The Sator Square: How did Romans Handle Messiah?

One clue that early Romans converted to Christianity can be attributed to a mystical symbol called the Sator Square. The Sator Square is a remarkable ancient inscription found throughout the Roman Empire (1st to 4th Century ace) containing five words read as a perfect palindrome or mirror-like inscription, not only readable in forward and reverse, but also up and down. 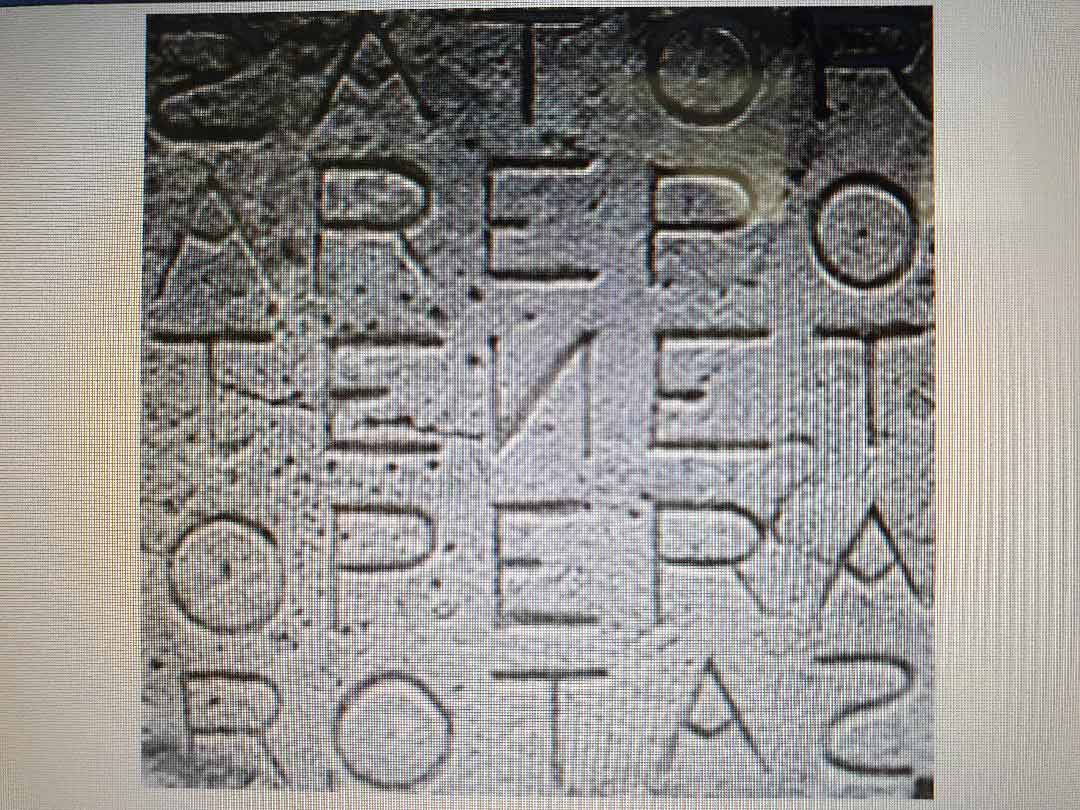 How were the Roman Military Standards represented on the Sator Square?

The inscriptions are believed to be carved by Roman soldiers who had converted to the Christian faith. They carved this secret mystical code to testify to their faith without being discovered as traitors to the Roman deified Caesar. The following map lists the earliest locations in the Roman Empire where the Sator Square has been found:

The Sator Square was first used in the Roman Empire from the 1st to the 4th Centuries.  The earliest inscription was found in the house of a baker in Pompeii which was covered by volcanic ash by the Mount Vesuvius eruption in 79 aces. 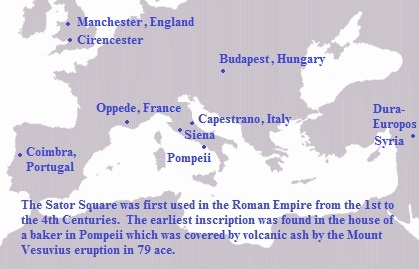 The Sator Square was found in four separate inscriptions at Dura-Europos on the Euphrates, an outpost for Roman soldiers. In Pompeii, there are two inscriptions which were found buried in volcanic ash with other Christian symbols in the home of a retired Roman soldier. Given the extremely liberal atmosphere in 1st Century ace Pompeii, the soldier turned baker likely used the Sator Square as a warning talisman or prayer against the corrupt atmosphere of Pompeii. Given that Pompeii was buried in 79 aces, the dating of the Pompeii Sator Squares points to roughly 70 ace. Along with these ancient finds, the square was adopted by medieval Christians as the names of the five crucifixion wounds of Christ.

So far scholars have identified several early Christian symbols on the Sator Square. There is the symbol of the Cross formed by the word TENET; the unusual sentence likely hiding the words of the Christians’ Jesus’ prayer, Pater Noster (Latin for Our Father); and there are the letters A and O possibly representing the Greek letters Alpha and Omega which John the Christian apostle ascribed to Jesus when he wrote the book of Revelation:

See, I am coming soon; my reward is with me, to repay according to everyone’s work. I am the Alpha and the Omega, the first and the last, the beginning and the end.
Revelation 22:12-13