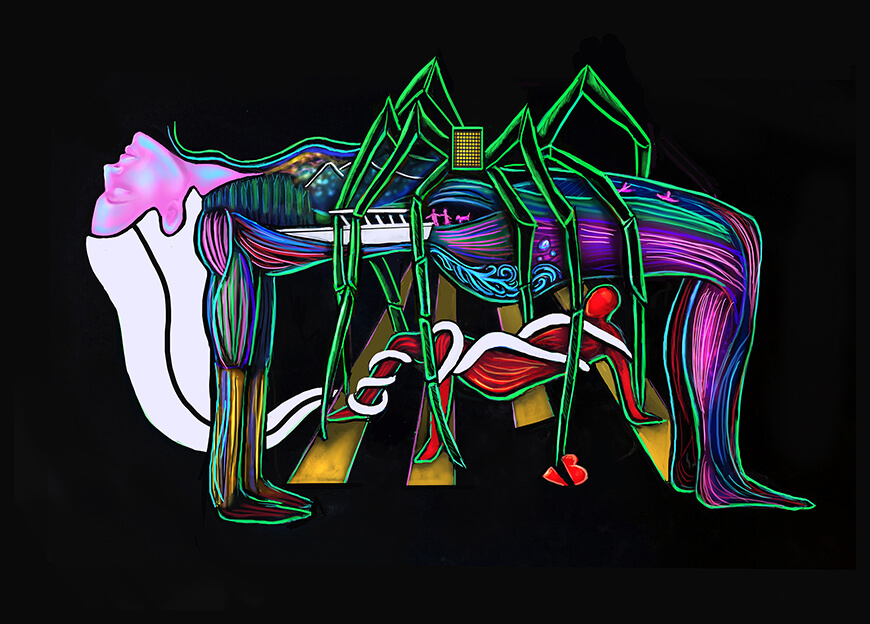 In the story the protagonist fears getting close to a soul mate due to being psychologically affected by the fear of losing someone he gets close to, will affect him traumatically in the same way that has affected him losing his mother.

UNA’s agent Merisi tries to indicate to the protagonist that he needs to stay close to someone who cares for him and who can help him find his true path to his destiny.  The protagonist needs his soul mate for companionship on his journey to the future to offset his weaknesses with his soul mate’s strengths.

In the story both UNA a global public sector organisation and GIATCOM a global private sector enterprise in the future have different political and economic agendas, to make use of the protagonist’s creative vision for the future of the world.  Can we distinguish which political and economic agenda would be the best for future prosperity in designing our future city infrastructures?

How Cities Can Learn from the Human Body’s Systems

Much like the human body with its skeletal, cardiovascular and nervous systems, cities have infrastructure systems, such as highways, water systems and communications systems that allow people to move about the city, deliver goods and services and share information.  But as we’ve seen recently, these city infrastructures often collectively fail during man-made and natural disasters. Why? Unlike the human body, these systems are often developed in silos, over time, in less-than-perfect ways. They are typically built for normality, not adaptability. As a result, there is no guarantee — often no real plan — that they work well together when subjected to a shock like flooding, a large earthquake, a heat wave, or a long-term stress such as explosive population growth and ensuing congestion.

The way these systems become interdependent can make a city brittle, and it means that in a disaster, a failure in one system quickly cascades to the next. For example, metropolitan water is used for drinking, but also for local agriculture and power generation. A drought that severely constrains water means that water for human consumption must become a priority, but that can lead to a loss of water for agriculture, as California is now experiencing, and power generation. To combat these water cascades (no pun intended), cities must not think about water systems without also thinking about food and power systems. As with the human body, each of these systems is semi-autonomous to capitalize on its specialized function, but will fail – now or in the future – if it can’t rely on the other systems. Hold your breath for a minute and think through all the system cascades your body will go through – aerobic, circulatory, muscular, nervous system – to adapt to the loss of just one system. The difference is your body has evolved this adaptive ability; many cities have not.

There is no shortage of real examples where infrastructure systems cascade during disruption:

As a result of these system failures, lives are deeply, often permanently changed; many businesses disrupted by these disasters never return.

So, what can cities do?

Metrics for cities on the way

Resilience analysis will require risk assessment and resilience measurement. As we speak, metrics are being generated: a recent Suisse Re study estimates city risks to natural disasters; a recent Grosvenor study takes it one step further by analyzing cities’ resilience based on their vulnerabilities and adaptive capacities. The latest C40 Report outlines climate adaptability metrics and design approaches for 63 member cities. And cities can utilize advanced techniques, such as scenario planning in conjunction with options analysis, to address not only climate and other future uncertainties but also what adaptability cities can put in place to be resilient to that uncertainty.

Smart growth – literally, being smart about city growth – can generate a resilient future if cities tame these increasingly ungainly infrastructure systems, through analysis and then resilient design or redesign, and implement these designs through city planning, investment and coordination. Designing infrastructure for resilience can be done while designing for growth. Individually and collectively these systems can and do serve us well – even thrive – during growth, stress and shock. And even during everyday life.

Another geologist, Bill McGuire of University College in London, is quoted as saying, “All over the world evidence is stacking up that changes in global climate can and do affect the frequencies of earthquakes, volcanic eruptions and catastrophic sea-floor landslides. Not only has this happened several times through Earth’s history, the evidence suggests it is happening again.”

It’s going to be very rough time for lots and lots of us worldwide in the coming years and decades, but if we do our work well, if we stand up together against the climate deniers and their fossil fuel industry enablers, humanity still has a fighting chance of emerging on the other side with a very different world.

And life is better when you give of yourself for a cause that is right and just, no matter how heavy the odds.