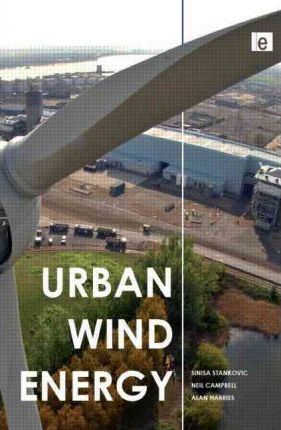 The rapid growth of large-scale wind farm installations has now led to the generation of clean electricity for tens of millions of homes around the world. However, despite the potential to reduce the losses and costs associated with transmission and to use local wind acceleration techniques to improve energy yields, the potential for urban wind energy has yet to be realised.

Although there is increasing public interest, the uptake of urban wind energy in suitable areas has been slow. This is in part due to a lack of understanding of key issues such as: available wind resources; technology integration; planning processes (include assessment of environmental impacts and public safety due to close proximity to people and property); energy consumption in buildings versus energy production from turbines; economics (including grants, subsidies, maintenance); and the effect of complex urban windscapes on performance.

Urban Wind Energy attempts to illuminate these areas, addressing common concerns highlighting pitfalls, offering real world examples and providing a framework to assess viability in energy, environmental and economic terms. It is a comprehensive guide to urban wind energy for architects, engineers, planners, developers, investors, policy-makers, manufacturers and students as well as community organisations and home-owners interested in generating their own clean electricity.

Buildings with integrated wind turbines could generate at least 20 percent of their own energy needs, and perhaps all. They would be more power efficient than ordinary wind farms or solar powered constructions, say UK researchers.

An international team of architects, engineers and aerodynamicists has come up with a design for a multi-tower office building or block of flats with wind turbines fitted in between. This design is one result from an EC-funded project, “Wind Energy for the Built Environment”, or Project WEB.

Curved towers would funnel wind towards the turbines and improve efficiency, the researchers say. Preliminary testing on a seven-metre prototype, designed by Mecal Applied Mechanics in the Netherlands and erected at the UK’s Rutherford Appleton Laboratory, indicates that the design could be twice as efficient as a stand-alone wind power generator, despite the fact that it does not move to face the wind. Wind speeds in urban areas are typically about two thirds of those in rural areas, so the extra efficiency is vital, says the team.

The prototype turbine is two metres wide, but the full scale version will be 30m in diameter (Photo: Project WEB – RAL/Imperial College)

Wind power is in general more cost effective and takes up less space than solar power.  A typical mast generator is around five times less expensive than photo-voltaic solar panels that produce the same power. These panels would also be likely to occupy 10 times as much space.

“We are talking about a huge potential,” says Sinisa Stankovic of project co-ordinators BDSP Partnership. “Twenty percent should be a minimum.”

Other experts are impressed. “At face value the potential would seem to be enormous,” says Marcus Lee, an architect with the Richard Rogers Partnership in London. “Integrating [turbines] into buildings could be a new paradigm.”

Wind turbines in rural areas are often criticised for detracting from the landscape and for generating noise pollution. Stankovic says noise insulation around the turbines could dampen sound. Traffic in cities would also drown out most of the noise, he suggests.

Architects at the University of Stuttgart have created a prototype design for a two-tower 200-metre tall building with three integrated turbines. Each turbine would need to be 30 metres in diameter to generate a minimum of 20 percent of the energy needed by a building of this size.

Stankovic says it is hard to put a price on the design. Integrating wind turbines into a building would be expensive but still a small fraction of overall building costs, he says. However Lee says the unusual curved shape could prove very costly. “It’s going to take time, and capital investment is always a problem,” he says. Lee adds that the thermal dynamics of the structure would have to be carefully considered, as the turbines could have a dramatic cooling effect on the building.

Pressure on planners to harness renewable resources in urban settings is growing. The UK government has pledged that 10 percent of all national power will be generated from renewable sources by 2010.

Atkins achieved a world first by aesthetically incorporating commercial wind turbines into the fabric of the building. The three 29m diameter wind turbines and the shape of the paired towers have a direct and tangible relationship via wind dynamics. The Carbon Critical Design of the Bahrain World Trade Center meant it was fully tenanted by major regional businesses from day one. Atkins also received a number of accolades for the design including a Best Tall Building award from The Council for Tall Buildings and Urban Habitat, a Construction Week award and an Innovation award from The Building Exchange.